Contact Us Today For A No Obligation Commercial Farm Quote

Enter your building postcode in the text box below.

For such extensive areas like farms, having a reliable electricity source is so important. One of the best ways of collecting the sun to generate energy for your farm is by solar PV. Its become one of the most popular ways for farmers to harness energy and reduce electricity bills long term. Installing solar will ultimately improve your farm and make it a safe environment for nature to grow and be protected.

Maintenance Packages For Your Farm

At Empower we offer an outstanding customer maintenance package that means you won’t have to pay for individual call outs instead you'll pay a fixed price of £185 which will cover any call outs you may require for the entire year.

Maximizing Productivity With Solar For Farms

using solar to generate your farms electricity is an ideal way to maximize productivity on your land. Solar will increase your energy efficiency and reduce your carbon footprint and energy bills whilst giving you the freedom to monitor how much your spending each month. Providing you with a system that matches your needs so you don't end up paying more than you should.

Our Solar Edge inverters combine flexibility and intelligence to bring you the most advanced technology. Alongside Optimizing solar panel production Solar Edge provide a system monitoring app that lets you keep close tabs on your system and even sends you alerts when its underperforming or not performing properly.

The Future Of Solar

With constant battles over trying to save our planet from global warming, renewable energy is the way forward. Solar is an environmentally friendly way of generating electricity available for everyday use as well as protecting your farms investments and profitability. solar for farms makes complete sense for every farmer looking to add value and, cut costs at the same time.

Why Choose Us As Your Installers?

At Empower we make ensure we deliver outstanding installations to all our customers and match the high standard customer service we enforce within the company. If you’re in consideration of installing solar for your agricultural farm or outbuilding here’s why you should choose us as your trusted installers.

How The Solar For Farms Installation Process Works

How does it work? Once you’ve contacted our team with the details required, we’ll provide you with a solar system quote specific to your project. Once all the design and planning for your project is completed our team of engineers will visit the site and start the official installation of your solar system. Solar panel installations can take several days depending on the size system you require for your outbuilding/ agricultural farm.

Is My Farm Suitable For A Commercial Solar Panels PV System?

There are many contributing factors to a systems’ effectiveness, such as location, angle, shading etc. By far the best way to check is to have one of our experienced commercial solar surveyors visit you personally and prepare a no obligation report and quotation. Not only will this highlight your system options, it will also show the estimated generation that you can expect from your system based on accurate details prior to installation, instead of averages and ‘best case’ figures.

What Will My Commercial Solar Panels PV System Look Like ?

We’ve installed hundreds of commercial solar panel systems of every size and will tailor a tried and tested solution with the minimum impact to your business. Installations can take as little as one day and you’ll notice immediate changes to your bills. 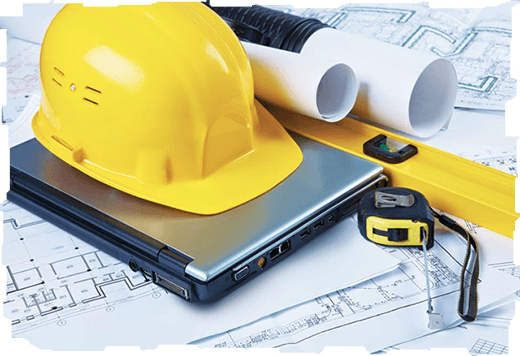 We supply our Clients with advanced commercial solar monitoring software to keep track of your system's performance. Wherever you are in the world, the platform can be accessed through the internet via your smart phone, ensuring you keep up to date with your systems performance.

We only use approved, high quality components, from tier-one panels, the highest efficiency inverters and right down to the nuts and bolts. This means that your commercial solar system will perform to its maximum potential for years to come.

Solar panels are an intelligent investment that has a positive impact on everyone involved. Installing solar on your commercial farm means any electricity rates prior that have prevented the ability to put money into areas that will benefit your business will be a problem you'll no longer have to face. For any farm big or small hoping to save money whilst grow, having to think about how much your electricity bill is going to cost each month is something that’s not only preventing potential earnings in other places but becomes a common annoyance. Solar for farms allows you to take control and spend your money how you want to, by using electricity sourced from natural energy on a day to day basis should not only make you feel better about your everyday lifestyle choices but will also cut your electricity bills down each month by up to half as much.

Solar panels require little maintenance especially in the winter when bad weather conditions mean the panels often clean themselves without the need to have to pay for engineers to come out and maintain them. In the summer more work may be needed to keep the panels up to standard because the dry weather means the panels have little rain so are unable to stay clean and can therefore, get quite dirty and not look as appealing. Signing up to our maintenance package means you'll pay a fixed rate for the entire year and for that get your panels annually cleaned, inspected and kept up to date to guarantee high panel efficiency.

Regular maintenance checks are especially beneficial for larger commercial solar systems because it ensures the system is operating properly with no underlying issues. Something important to regularly check with large systems because if something does go wrong it can impact the business on a large scale. Solar panel servicing means any potential problems can be terminated before they become any bigger and affect the functionality of the system. 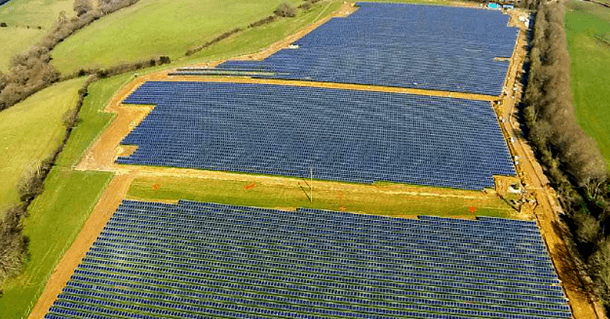 How Long Does It Take For Solar Panels To Pay For Themselves?

Solar panels are a great investment for any farm, wanting to grow, whilst saving money at the same time. With commercial solar panels, the payback time can vary because the systems can differ so much in size from as little as 10kw to as large as 250 kW with paybacks of between 8 and 12 years on average. 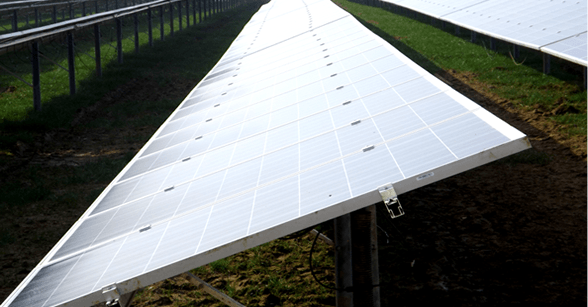 How Many Solar Panels Do I Need For My Solar Farm Business?

How Much Do Commercial Solar Panels Cost?

Commercial solar panel systems can range anywhere from £5,000 to £80,000 + for larger kW systems depending on the size you anticipate getting. Anybody who knows anything about solar systems will know its virtually impossible to put an exact price on the cost of your solar farm before receiving the right details because each system varies such a significant amount. From the type of panels used, to the system size and what type of system it is. These factors can all make the cost of your solar farm go up or down. Before any prices are given out you'll need to give your installers the required details so the estimated system cost can be accurately calculated.

What Happens To Solar Panels After 20 years?

Photovoltaic solar panels often include a warranty of 20-25 years however, various solar customers have made use of their solar panels long after the warrantied time has finished. Solar panels have an average deficiency of around 0.5%-1% every year which would mean after 20 years your panels would still be over 80% efficient. Over time solar panels become slightly less effective and degrade over a period of time however, this doesn’t mean that after 20 years your panels are going to stop working by any means but does however, mean you’re guaranteed panel period is no longer valid.
.

How Can My Farm Benfit From Solar?

Constant electricity price rises are forcing people to take a look at their bills and revaluate how they can save more and spend less. That’s where solar comes in. Solar gives you the freedom to maintain a profitable and well valued solar farm whilst allowing you to reduce your energy bills by a significant amount at the same time. A farmer its always important that your solar farm keeps its value and that you can carry on growing your solar farm. Equally having a renewable source of energy, you can use day in day out is just as handy.

Years of global warming and harmful emissions being released into our atmosphere means were now continuously trying to save our planet and keep it green with the limited time we have left to turn it all around. This is just one of the reasons why solar is becoming increasingly popular especially on solar farms, people know that solar is a clean, renewable source of energy that reduces the amount of Co2 produced into the air and by installing solar onto their farm they’re helping to do their bit for the environment

The PPA stands for Power Purchase Agreement. This agreement where one investor sells electricity at a fixed rate to the customer therefore both of them financially benefit from the agreement. The electricity that is sold to the buyer is significantly cheaper than standard electricity rates, this is why it works so well and is a bonus of installing solar to your farm.

A farm with a large kwp (kilowatt peak) solar system is going to generate considerably more electricity than a smaller kwp system. This is what makes such a difference in price. Whether it’s a smaller system you require or a large kwp system, solar is ideal for either because it works to accommodate your needs and ensure your system is the right size for what your farm requires. 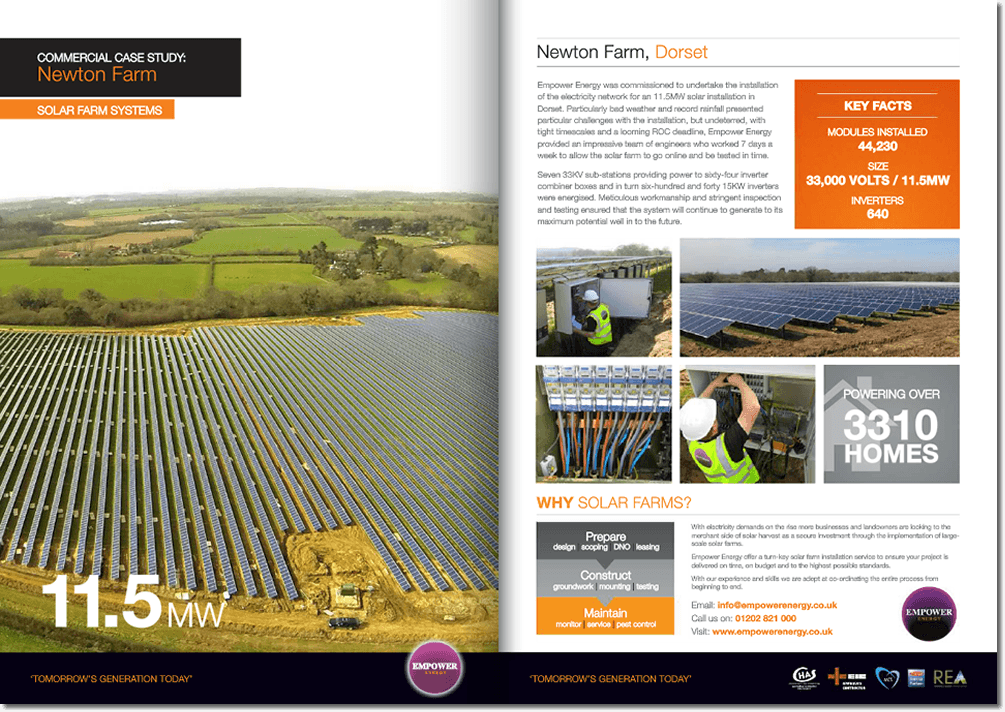 Empower was commissioned to undertake the installation of the electricity network for a 11.5MW solar installation. Empower provided an impressive team of engineers who worked 7 days a week. 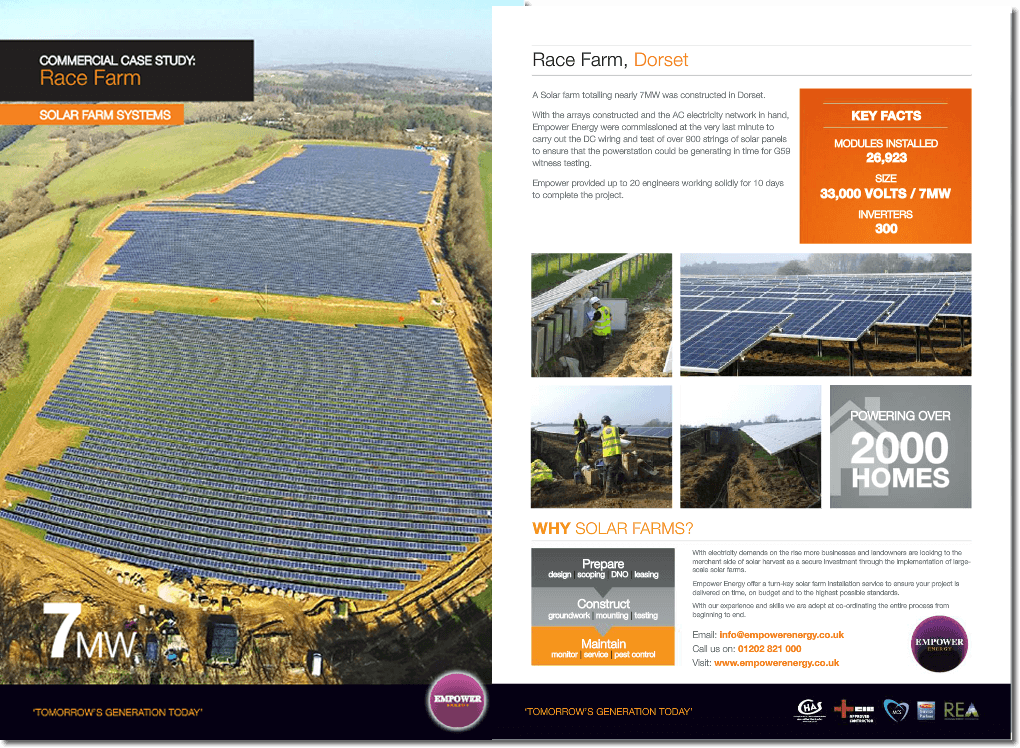 A solar farm totalling nearly 7MW was constructed in Dorset. Empower was commissioned at the very last minute to carry out the DC wiring and test of over 900 strings. Empower provided up to 20 engineers working solidly for 10 days to complete the project.